Despite collective efforts by political parties to have genuine dialogue on issues critical to ensure free and fair elections in 2018, the Supervisor of Elections and Electoral Commission continue to be obstructive in response to our genuine concerns.


The communique emanates from the collective disappointment of Party Leaders on the attitude of both Chairman of the Electoral Commission (EC) and Supervisor of Elections (SOE) in response to genuine concerns, suggestions and recommendations made to ensure that there will be free, fair and credible elections in 2018. 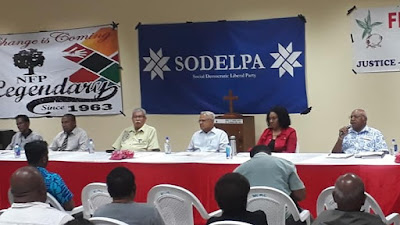 
The Electoral Commission Chairman Mr. Suresh Chandra called for a meeting with all registered political parties on 9th August 2018 to discuss matters relating to the 2018 general election.


Prior to the meeting on 9 August 2018, the six political parties have been collectively working together in the last 15 months making submissions to the Electoral Commission to address issues of concern to ensure the 2018 general election is free, fair and credible.


Submissions by political parties were drawn from recommendations of the 2014 Report of the Multinational Observer Group (MOG) and the 2014 Electoral Commission Annual Report on key recommendations to further improve the 2018 general election. Our submission to the Commission on May 2017, is available online at http://bit.ly/fjElectoralRefomSubm


It is unfortunate that the Electoral Commission has downplayed issues raised in the submissions of 27th July 2018, 6th and 16th August 2018 considered critical to ensure free, fair and credible 2018 elections.


The following nineteen issues and request for clarification were made to the Electoral Commission in late July and early August 2018 remain unanswered:

10.  Refusal of the Electoral Commission to approve access to the Regional Hubs by party polling agents to observe the opening of ballot boxes by Presiding Officers.

12. Refusal of the Electoral Commission to explain the involvement of NADRA with Fiji’s elections especially after the recent Pakistan elections where it is under various investigations for irregularities.
13. Parties are disappointed at the extensive Pre-Poll venues where over 70,000 voters will vote and the lack of explanation from the Electoral Commission on how pre-poll venues were selected. Many pre-poll venues are accessible by road from urban centers and it is baffling why they are designated as pre-poll.
14. Refusal of the Electoral Commission to explain why 13 Polling Venues Designated for Disciplined Services are not identified in the list of polling venues for 2018, and why the names of voters for these 13 polling venues are not published in the Voter Roll released by the SOE on 1 August 2018.
15. Parties remain concerned that the Electoral Commission rejects the constitutional responsibility to ensure free and fair elections. Political Parties believe this role includes the responsibility to call for international and domestic observers who should work to their own Terms of Reference rather than one imposed by the Minister responsible for Elections, as in 2014.

16. Parties are gravely concerned about the Supervisor of Elections recent warning on voter education by Civil Society Organisations.
17.   It has been a long time practice and convention not to permit political campaign materials to be displayed on land, buildings or property owned by the State, municipal councils and statutory bodies including government commercial companies.  This should be maintained. Public parks, playgrounds  and recreation areas owned by the State or municipal councils should not be exploited for political purposes. Citizens should be able to enjoy these facilities without being bombarded with political messages. It is questionable that Fiji First was allowed by municipal councils to lease huge billboards erected  in public places in collaboration with an advertising company. This is clearly contrary to s112 of the Electoral Decree.
18.   Parties remain concerned that Mr. Mohammad Saneem still does not meet the minimum qualification requirements (MQR) for the position of Supervisor of Elections. His appointment was irregularly made in 2014. The Electoral Commission requested the Minister responsible for Elections to re-advertise the position after qualified applicants withdrew, yet Mr. Saneem was appointed to the position despite not meeting the MQR. Further, Saneem’s insubordination to the Commission was confirmed by the High Court in 2017, and two complaints he has filed with FICAC have resulted in acquittals. This has led to questions over whether he has demonstrated an overzealous misuse of his powers (cases against Hon. Ratu Isoa Tikoca and Hon. Mahendra Reddy).
19.  Political Parties no longer have confidence in independence, impartiality and credibility of the Chairman of the Electoral Commission Mr. Suresh Chandra, and the Supervisor of Elections Mr. Mohammad Saneem and doubt their ability to deliver free, fair and credible elections for Fiji in 2018.


Parties were directed that only Party Leaders and Registered Officers may attend the meeting on 9th August 2018 and that “invitations were not transferable.”


Questions and cncerns raised by registered officers of political parties who attended the meeting on 9/8/18, were not answered or brushed aside by the Electoral Commission.


A notable feature of the meeting was the presence of the Minister responsible for Elections and General Secretary of FijiFirst Party, Hon. Aiyaz Sayed Khaiyum. Rather than encouraging discussions on suggestions and recommendations made by other political parties to ensure free, fair and credible elections, he continued to demand what action the Electoral Commission had taken on the allegations of religious intolerance against a particular provisionally selected candidate. The Electoral Commission Chairman in his response said that they were yet to act on the complaint, while the Supervisor of Election at the same time said that he had filed a complaint with FICAC.


The Electoral Commission Chairman as well as members of other political parties were taken by surprise at the outburst.


Those that attended the meeting were surprised to learn that the Supervisor of Elections (SOE) had already made a complaint to FICAC without the knowledge of the Electoral Commission.


Questions were asked on how electoral laws can be transparently amended when the AG, Hon. Khaiyum is also responsible for the drafting of laws, tabling them in Cabinet as Minister for Elections, while at the same time being General Secretary for FijiFirst.


No satisfactory answer or response was given by the Hon. Khaiyum in either capacity as GS FFP or Minister responsible for elections.


Despite setbacks faced by political parties present, they remain undeterred and committed to a free, fair and credible elections. They urge all voters to remain steadfast and encourage everyone must register to vote, and to vote on their designated polling venue, whether at pre-poll or polling day, or postal voting.


Voters are urged to vote in numbers to bring about political change that is necessary for our collective future.


Voters are also encouraged to exercise their democratic rights and political freedoms  in the formulation of our next government. Voters can offer their services to political parties as polling agents in the 2018 general elections.


Another alternative for consideration is for local groups and organisations that can be considered as domestic election observer groups. However, the approval of the Minister for Elections is required. In 2014 he refused to approve domestic observers.


Despite these setbacks, parties will continue to collectively work together towards a free, fair and credible 2018 elections.


The Party Leaders stressed the need for independent international and domestic observer groups to be present before, during and after the election to monitor the process and validate that the elections are free, fair and credible. Independent Observers must be able to determine their own Terms of Reference (TOR) unlike in 2014 when the Minister for Elections decided their TOR.


Based on the lack of clarity, inconsistency and at times the non-response/or actions to concerns raised in the last 15 months on issues relating to free, fair and credible elections, the Leaders of the six registered political parties reiterated that they don’t have any confidence in the Chairman of the Electoral Commission and the Supervisor of Elections.

They are also of the view that the credibility, impartiality and independence of the two constitutional offices have been compromised.


The appointment of the Supervisor in 2014 is also questionable as Mr. Saneem did not meet the minimum qualification requirements stipulated in the Constitution.