The Social Democratic and Liberal Party (SODELPA) Leader, Former Prime Minister Sitiveni L Rabuka said today that the SODELPA Party is concerned that a foreign company has been engaged to carry out various tasks for the Fiji Elections Office. He said this begs the question whether the Elections Office had tried to source local expertise for these tasks, much of which were carried out with local expertise for the 2014 elections. The tasks, according to the Supervisor of Elections speech on 17/6/16 are:

Rabuka said that SODELPA has concerns about reports emanating from Pakistan alleging that NADRA fraudulently issued identification papers to those not entitled to do so. There are also reports of NADRA’s questionable performance on general elections in Pakistan.


“I seek clarification from the Electoral Commission, whether due diligence was carried out on NADRA, who were on the panel that decided this tender, confirmation that locals cannot do this work, and what assurances the Commission has received, about the allegations levelled against NADRA. We also seek clarification on when in the process GEM Fiji were included as a partner, and an outline of the timeline of the tender process. We are also informed that the work that NADRA is being engaged to perform, can be done locally, so we wonder at this rush to engage foreign companies, when local expertise already exists for this kind of work. What happened to the government’s professed aim to “buy Fiji made”? ” 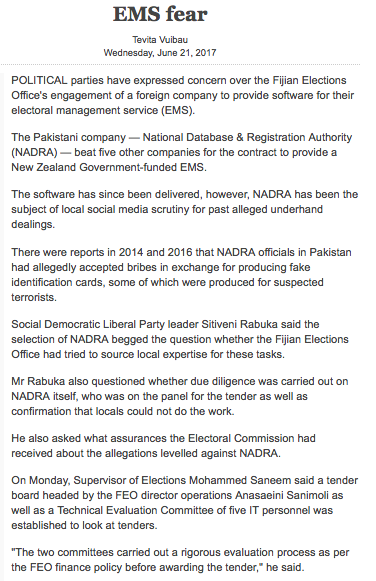 “We also note that NADRA has not been involved in elections work outside of Pakistan, and for the elections work it carried out in Pakistan, various allegations have been made against NADRA, as reported in local Pakistani and international media articles.”

“I will also seek clarification from the Electoral Commission about the privacy of our voters and the security of their information which will be managed by this overseas entity and what reassurances and measures are in place to secure the confidentiality of our peoples’ information.”

“I and other registered political party leaders have regular meetings with the Electoral Commission and will raise these concerns directly with the Commission.”

“On 18 May, 2017, SODELPA and four registered political parties NFP, FLP, PDP, FUFP, made a submission for electoral reform to facilitate free and fair elections in 2018, based on the recommendations of the Multinational Observer Group (MOG) and the Electoral Commission Annual Report 2014. We discussed our recommendations with the Electoral Commissioners at our meeting on Friday 16 June 2017.”

“Our joint party submission for electoral reform to the Electoral Commission collated the various submissions that SODELPA and other parties have been making to the Government, Parliament and the Electoral Commission since 2013 when the electoral decrees were first published and after the 2014 elections. The Commission has said it would respond to our submission by 30 June 2017. The five parties also have a public petition seeking the signatures of our citizens who support the call for reform of our electoral laws and processes to enable free and fair elections in 2018.”