SODELPA Party President Ratu Naiqama Lalabalavu, today called on the Fiji Rugby Union to be fair and to contract our Olympic gold- medal winning Rugby 7s Team. Ratu Naiqama said the the victorious players, coach and management deserved every accolade and encouragement after their historic gold medal win at the Rio Olympics earlier this year. Some estimates put the benefit to the Fiji of this historic Olympic gold medal, in increased investment and tourism in excess of FJD$500m, given the unprecedented media and global attention Fiji's win had garnered.  He said it is only right that FRU should do the right thing and contract our Rio Gold winners.

“The FRU should not shoot the messenger, or Ratu Peni Raiyani Latianara as he has become known in Fiji having been so honored by the chiefs and people of Serua Province. Under Ben Ryan’s visionary and tactical leadership, the team worked with determination on their dream, a shining example to all of Fiji on the benefits of sacrifice, determination, perseverance and hardwork that culminated in the Rio Gold win.”

“The Team were unequalled Ambassadors for Fiji and their sportsmanship, the flawless performance and their humility and chivalrous display of respect for the Princess Royal, Princess Anne, as she presented their gold medals won the respect and admiration of the whole world,”

“SODELPA recommended after the win that all national 7s players to be on contract of $30,000 p.a and I reiterate this recommendation to the FRU, for the benefit of the players and of our nation. After the Rio Gold win, there is no doubt that the team and its achievements is a unifying factor for our nation, as well as being a national asset that does more than any other industry or figure to make known our nation and its people. This is where the $40m sponsorship by Vodafone is to be used by the FRU. After all, the team’s Rio win is also a win for the sponsors, so it is only right that they are contracted and paid handsomely for their efforts for our nation.”

“I also call on the Minister for Sport and the Fiji National Sports Commission to work with and support the FRU in ensuring that Fiji retains our 7s players and that we are compensating them well in order to support their families. We cannot expect them to give up lucrative overseas contracts to play for their nation when we do not reward them handsomely. The days when FRU takes players for granted should be well over and done with.”
ENDS// 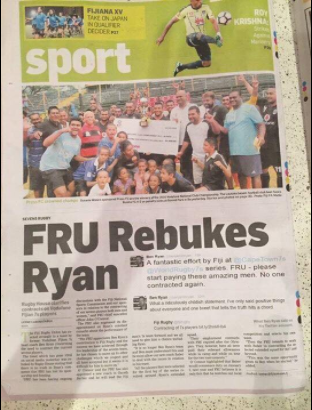 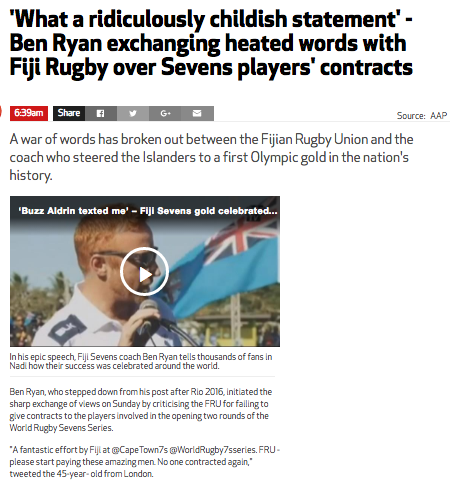