Social Democratic Liberal Party(SODELPA) Party Leader, Major General Rabuka today called on the Government to issue Declaration of National Disaster in the areas worst affected by flooding and landslides caused by the wind and rain of the tropical depression TD04F that affected Fiji from Saturday 17 December and whose effects still linger in parts of Fiji.

“I call on the Disaster Management Ministry to expedite its assessment and Declaration of the Disaster and Red Zone areas devastated by the recent Tropical Depression that lashed Fiji from 15th December. The quicker that the declaration is made, the quicker that assistance can be sought from development partners. The rest of Fiji not affected by TD04F, can also pitch in and do their part. Development partners and NGOs cannot release assistance without the National Disaster Declaration.”

“The situation on the ground also necessitates the immediate mobilisation of military personnel to be deployed to Divisional Commissioners in the affected areas to begin cleanup, and relief/ration distributions before Christmas." 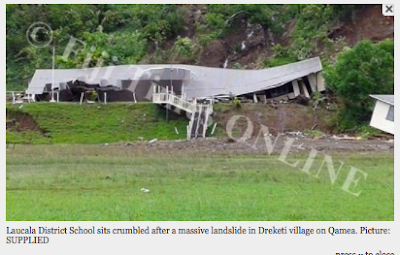 “I remain concerned at the further devastation caused by TD04F on those areas in dire need for assistance from February 2016 when severe TC Winston struck Fiji. TD04F, cyclones and other extreme weather phenomena were predictable given Fiji’s cyclone season runs from November to April annually. If government had been better coordinated and reduced spending in certain non-essential areas, TC Winston victims could have been helped earlier to construct cyclone resistant homes. Yet Government saw fit to leave them in tents and they’ve been further traumatised and dislocated by TD04F.” 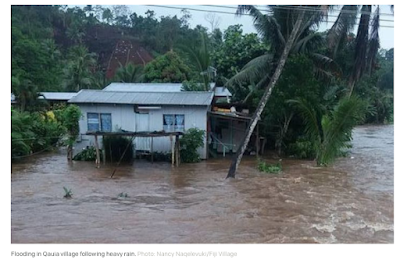 “Just as we saw some ten months ago in the immediate aftermath of severe TC Winston, the Prime Minister after his recent well orchestrated globetrotting to meet the 7s team in Dubai, is back centre stage visiting and commiserating with flood and landslide victims of TDO4F  in evacuation centers in Viti Levu, with the usual government fanfare, fawning state media photo ops, distributing food rations provided by aid agencies, NGOs and business houses. The photo ops are a misuse of government machinery which should be focused on assessment and rehabilitation rather than requiring the Minister, the Divisional Commissioner and District Officers to babysit on the tours.”

“And ten months since Severe TC Winston left our shores, hundreds of  our people who lost their homes are still living in tents and make-shift shelters and foraging for food for their families' daily sustenance.”

“It is obvious that the FijiFirst Government has not learnt any lesson at all from its deplorable and incompetent handling of the post relief rehabilitation phase of Severe TC Winston.”

“What every household member in these areas severely affected by floods and landslides want to know from the Government of the day is, will Government supply them with food and relief rations, when will this start, and for how long?  Second, will the Government help them rebuild their lost or destroyed homes (as it should) under the failed and disastrous Help for Home Initiative or under direct Government intervention or assistance, which SODELPA strongly urges Government to adopt.”

“Third and most importantly, now that the PM has seen with his own eyes the devastating effects of the floodwaters on the various communities he has just visited, and which according to them are unprecedented, will the FijiFirst Government now immediately declare a state of national emergency and/or disaster over the affected parts of Fiji to assist in facilitating and mobilizing international support and assistance (please note that without this declaration, we cannot expect bilateral and international aid( NGOs) to rush in).

“My earlier call for investigation and reprimand of companies, Ministers and officials at fault for the failed Help for Homes program remains urgent. We recommended the revival of the Prime Minister’s Cyclone Rehabilitation and Housing Department and the Government Supplies Department to monitor and drive rehabilitation. This important and urgent task cannot be abdicated to private companies by the Government.”

“The utter failure of the Help for Homes program is scandalous and borders on criminally negligent abdication of responsibility by the Government.”

“The decision to have the Social Welfare Ministry manage the Help for Homes Program is a monumental failure on the part of Government leadership and I intend to continue to call for the government to take responsibility and remedy its abject failure. The Opposition Parties have offered to work with Government since Day 1 yet FijiFirst continues to insist it is the sole repository of wisdom to solve our nation’s challenges.”