Rabuka: Do what is right, with malice towards none 1 January 2016

“Do what is right, with malice towards none”


The Social Democratic Liberal Party (SODELPA) Party Leader, Major General Rabuka in his message for the new year, emphasised a message of hope and goodwill to all the people of Fiji. 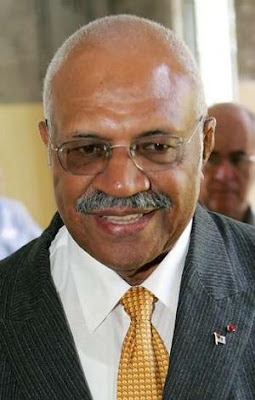 “As we look back over this year, 2016 has been a very challenging year for Fiji and all Fijians.  We had severe Tropical Cyclone Winston in February which was the strongest cyclone ever to make landfall in the Southern Hemisphere, and wreaked devastation and destruction on a scale never seen before.”


“Our victorious sevens team won our first national gold medal at the historic Rio Olympics, this was a balm to our nation devastated after TC Winston and brought us together in celebration. I pay tribute to the team and pray they are contracted and enabled to remain in our national team, they are truly a national treasure.”


“The year closed with another severe natural disaster, the tropical depression TD04F, many of our countrymen and women and their children still lived in tents and temporary accommodation in or near their damaged villages and settlements. In the aftermath of TD04F, more of our people are homeless and traumatised and it falls on those of us who are able to help them, to do our best, where we can, to come together as a nation and to help them.


“Only a few weeks away from the beginning of another school year school buildings and staff quarters in many of the damaged schools remain unrepaired, we thank our development partners who have been able to adopt a school, but many more need help and Government needs to do more rather than waiting for donors.”


“The inability of the government to properly respond to the devastating natural disasters is symptomatic of its refusal to listen and cooperate with those who may disagree with them. This is evidenced in the constant re-writing of parliamentary standing orders to suit their agenda and bulldozing tactics, and the expulsion this year of two more opposition parliamentarians for the remainder of the parliamentary term, a punishment deemed disproportionate by the Inter-Parliamentary Union. SODELPA remains concerned as well at the delayed non distribution of cyclone and flood aid to communities who may not have voted for FijiFirst, while those FijiFirst supporters are receiving aid promptly and abundantly.”


“We have seen no improvement on the 'police state' image of our society. Stringent requirements for public meetings, something that civilised and democratic societies take for granted, continue to be imposed on opposition parties and NGOs. Political parties now must obtain permits even for board meetings which are closed to the public yet deemed by the Police to require a permit. This continuation of a permanent state of emergency basically since the 2006 coup d’etat is an oppressive measure symptomatic of a dictatorial and tyrannical regime in fear of freedom of opinion, thought and open discussion, it is a mark of a regime that is fearful of ideas.”


“A new 'Fiscal Year' was introduced with destabilising effects on civil servants and Accounting Officers in Ministries and Departments. Whether it was introduced for good reason or merely to avoid the suggestion by the Parliamentary Opposition for review of the 2016 Budget after the devastation of TC Winston, we now have this radical change in our financial year seemingly on a political whim to avoid any appearance of heeding an idea from the Opposition.”


“International Aid donors remain confused about the use of their cyclone relief aid donations, the explanations that have been forthcoming are piecemeal and uncoordinated, if an accounting is not possible, is there any coordination at all of the rehabilitation effort? This is why SODELPA continues to call for re-establishment of the Prime Minister’s Housing & Cyclone Relief Department, and the Government Supplies Department. The Ministry of Social Welfare is simply not equipped to coordinate the relief effort which has been abdicated to hardware companies by the Government.”


“But Fiji and the Fijians will persevere.  We are made of sterner stuff.  We don’t need to be spoon-fed.  In the midst of all the tragedy, we have seen individuals come through with little or no government help to 'pick up the pieces, rebuild and move forward with confidence that things can only get better.”


“For us in SODELPA, we will continue to strive to do what is right, with malice towards none.”