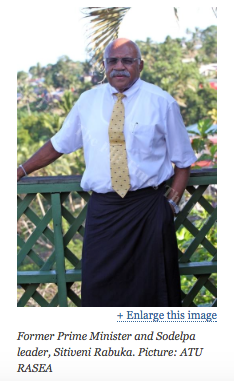 Social Democratic Liberal Party (SODELPA) Party Leader, Major General (Retired) Sitiveni L Rabuka today welcomed the Court of Appeal judgment in favor of the Electoral Commission who sought validation of a directive made to the Supervisor of Elections in 2014. The Commission had ruled that Praveen Kumar Bala was not a fit candidate to contest the elections and that Fiji Labour Party candidate Steven Singh was eligible to contest the elections and so directed the Supervisor. The Supervisor of Elections disagreed with the Commission’s directive.

“We are concerned that the Supervisor made submissions earlier this year to the Parliamentary Committee on Law, Justice and Human Rights, that he be allowed by law not to follow directives of the Commission. This is an affront to our growing democracy, where a Constitutional Officer has requested the right to defy the body that is envisaged to set the policy and direction of his office. It begs the question then, if he is not responsible to the Electoral Commission, who is the Supervisor really responsible to and whose advice is he following? So the ruling from the Appeal Court is timely.”

“The Supervisor is also facing complaints about his impartiality and his behaviour towards journalists and members of the public, particularly on twitter, where he questioned the right of citizens to seek redress. Such behaviour and this recent ruling put in question his suitability for this high office.”

“I therefore call on the Electoral Commission to review his performance and make appropriate decision on his appointment.”

“The continuing situation where the Attorney General, Minister for Economy, Public Service, Public Enterprises and Tourism is also Minister for Elections, as well as being General Secretary of the ruling FijiFirst Party, is also untenable and must be reviewed by the Prime Minister given that the AG supervises the Solicitor General who gives legal advice to the Supervisor of Elections.